Restaurants To Visit For Food Lovers

visualdata21 November 15, 2020
It’s not just Oslo that’s quickly becoming a foodie-favourite destination. It’s the whole country. From the south all the way to the Arctic north, Norway is embracing its culinary traditions, while incorporating new flavours and ideas from all over the world. Consider this list below your official cheat-sheet when it comes to savouring Norway’s best.

Let’s start with something easy: when the time is right (aka from July until October), you can go to any forest in this vast country and forage berries and mushrooms. See, here nature belongs to everyone: it’s ‘Allemannsretten,’ every man’s right to roam freely, hike, ski and camp, pick flowers, chop wood for fire, and perhaps most importantly, forage. More than 1000 different species of mushrooms can be found in the Norwegian forests and only 10-15 of them can be deadly (rule of thumb: if it’s red, don’t touch it!), but chanterelle are definitely among the most sought after. Golden-yellow, delicate and oh, so buttery, chanterelle are best enjoyed on their own, lightly fried on a pan with (you guessed it) butter – but you can also use them to accompany meaty dishes or risottos. As for berries, you’ll find a variety – but keep an eye out for the elusive cloudberries, also known as ‘the highland gold.’

The Mathallen food court in Oslo

Did this food hall turn the industrial neighbourhood of Vulkan near the river hip again, or was it the renovation of the neighbourhood that made Mathallen possible in the first place? It’s like the chicken-and-egg question (quite fittingly so, given that you’ll find both chickens and eggs here). But in the end, it doesn’t matter. What matters is that you need to step inside the brick building and taste all of the cheese, ice cream, sausages, meats, fish, and vegetables from small-scale producers, or just sit at one of the tables and grab a coffee/beer/cider and take in the busy crowd. If it’s a sunny day, you’ll want to grab your grub and get out. 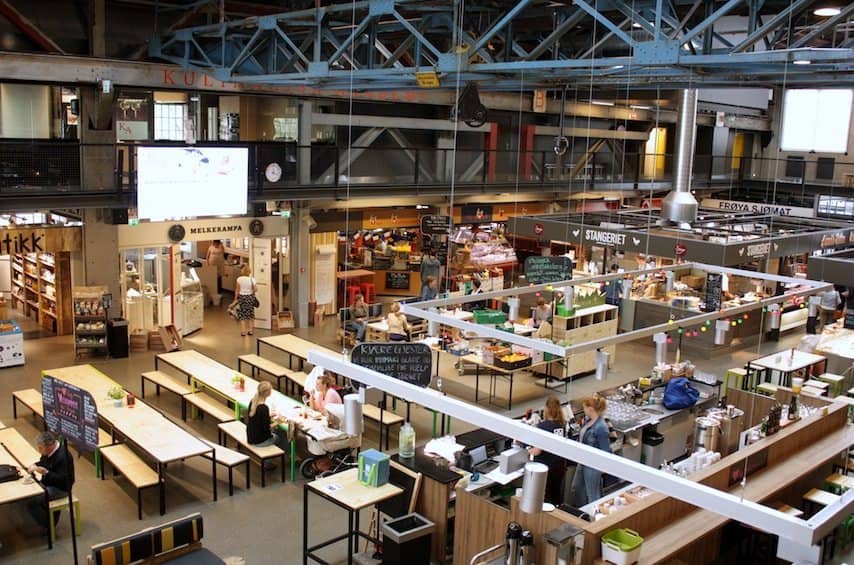 The traditional restaurants of Lofoten islands

Ah, the magnificent Lofoten islands. Apparently they’re good for other things apart from helping you take epic Instragram photos and generally making you feel like you’re on a different planet. The local cuisine is all about tørrfisk (stockfish, hung out to dry in the wind) and klippfisk (salted codfish) and you can taste both over at the Børsen Spiseri that has been gracing the lively town of Svolvær since 1828. Take a seat overlooking the wharf and enjoy local specialities such as Stockfish Royal (steamed stockfish fillet with vegetables and butter), or if you’re feeling more adventurous, the cured whale and stockfish brandade (a hearty spread made with salted fish and potatoes). Then, you can visit the Lofotmat deli and bring some of those flavours back home with you.

Fish markets all around the country

It goes without saying that in a country with so many fjords and such a huge coastline, fish and seafood is at its best. There are fish markets in almost all coastal cities and towns with a port, but the one in Bergen is seriously among the best. Here, you can buy uber-fresh seafood and just-caught fish, but also fruit and vegetables, in a place that has been the meeting point of the city ever since the 1200s.

The Trøndersk food festival in Trondheim

Trøndelag region is a pioneer when it comes to Norway’s local cuisine, with more than 200 producers being represented and awarded during the national food awards. When it comes to butter, cheese, sausages, jam and ham, you’re at the right place – and you can find them all together at the annual Trøndersk Matfestival that’s taking place in Trondheim in the summer. Just make sure to stick around because, this being Trondheim, there’s also a micro-brewery festival happening in August.

How far are you willing to travel for booze? Don’t answer that – because you won’t be travelling for just any booze, but for the world’s northernmost whisky distillery, at Myken island just north of the Arctic circle. The first single malt to ever been produced in Norway has matured under the midnight sun and the Northern Lights and now you can join a guided tour of the distillery and sample the goods. Cheers, or should we say, skål! 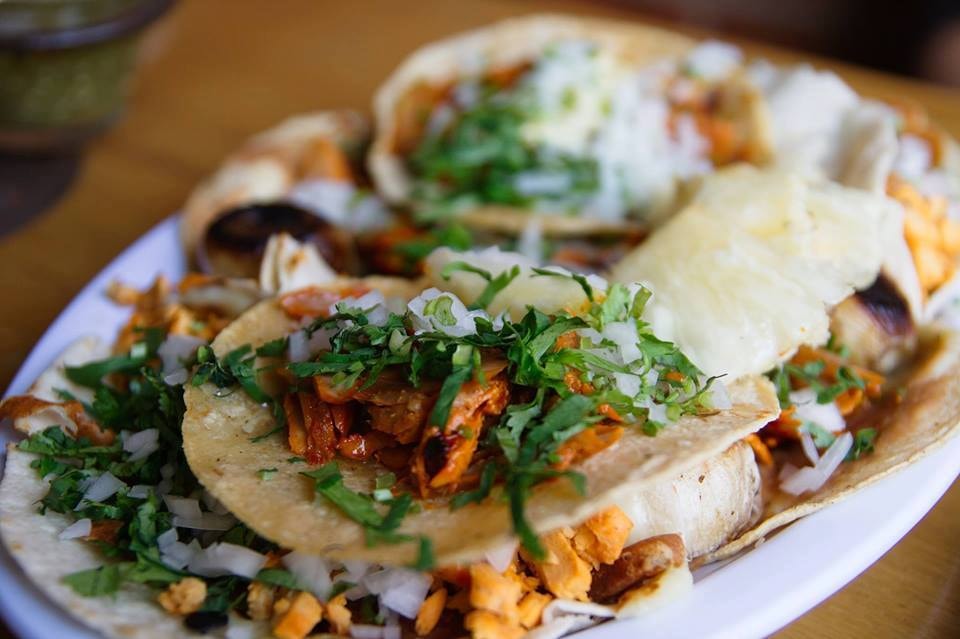 Okay, let’s be real: The only way to actually snag a table at Maaemo, Norway’s only three-starred Michelin restaurant, is to plan and book a table three months in advance (more or less). But that will be worth it, in order to savour Esben Holmboe Bang’s superb, seasonal tasting menu. Most ingredients come from the restaurant’s own farm, so you know what you’re eating is the freshest around.

Another food festival that should be on your radar, is the one that takes place in Stavanger. Gladmat is getting bigger and more impressive every year, with events like eating inside a cathedral and dancing to live music making this a top destination for more than 250,000 foodies annually. This year they have their 20th birthday so you can expect epic things.

Oslo’s newest food truck court is probably the coolest thing this side of Brooklyn (or, okay, Berlin). Strategically located at the port, Vippa hosts multiple food stands that serve sustainable, ethical and diverse food offers, from Syrian, Vietnamese and Thai street-food to authentic Italian pizza and hearty Ethiopian meals. Make sure to check out Tunco and their ‘meal for meal’ programme as well: for every meal you have, they donate one to children in Kenya. 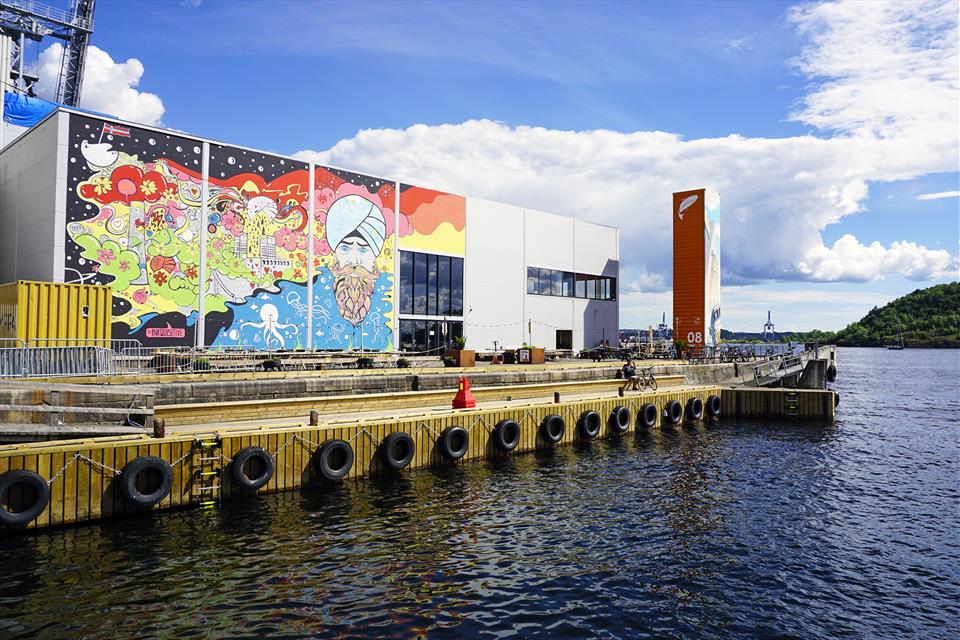 This food festival may be a bit smaller, but a discerning foodie like you knows that doesn’t matter – after all, it’s the world’s biggest when it comes to its focus. See, the Norwegian Rakfisk Festival in Fagernes is all about «rakfisk», a semi-fermented trout that’s the staple of the local cuisine. But that doesn’t mean you won’t taste other delicacies here; from cheese to aquavit and from jams to baked goods, this event won’t leave you hungry.

Cornelius is more than just a restaurant: it’s an institution, and a destination in itself. Situated on Holmen Island, just outside Bergen, with spectacular views of the fjord and mountains, Cornelius is accessible via a 25-minute boat ride that departs from Bryggen wharf at 6pm. Once there, you can enjoy the famous Meteorological Menu of seafood and trimmings, inspired by the weather of the day – either sitting outside, or by the cosy hearth in the winter.

Cancer patients in England ‘diagnosed too late’ due to staff shortages

How to cool down after exercise

Fitness tips: the back squat and the deadlift for beginners